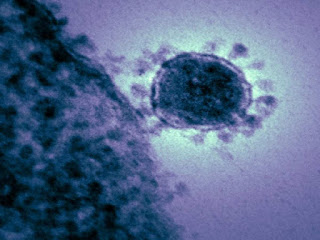 According to an old source, ribavirin and interferon alpha-2b have been found as potential treatment for a strain of corona virus.
An article in webmd told us: (1)

"A treatment for a new coronavirus that has caused 11 deaths, mostly in the Middle East, shows promise in early tests, U.S. government researchers report.
The investigators discovered that a combination of two antiviral drugs -- ribavirin and interferon-alpha 2b -- can stop the so-called nCoV coronavirus from multiplying in laboratory-grown cells. While the results suggest that this drug combination could be used to treat patients infected with nCoV, more research is needed to confirm these early findings. Both drugs are approved in the United States for treating people with hepatitis C.
The nCoV coronavirus was first identified in Saudi Arabia in September 2012. As of April 16, 2013, there had been 17 reported cases, including 11 deaths. Most cases have occurred in the Middle East."

But such a finding was only in early investigation phase.
We don't know yet what is the latest update of such a new potential treatment.
Nonetheless, a fast response to nCoV epidemics spreading by medical institutions is urgently in need.

Popular posts from this blog

ThirdElijah
He was born in Indonesia, and studied engineering in a state university in East Java. Then he worked until 2008. In Dec. 2008 he was granted a scholarship to study gravitation and cosmology at Institute of Gravitation and Cosmology in Moscow until June 2009. Since Oct. 2009, he works for Jesus Christ. He published more than 45 papers and 16 books. Get his new book: https://www.facebook.com/ABiblicalTheoryofEverything. Since Aug. 2015, he holds Doctorate of Divinity and administers Sci4God.com.